I met Will Hardman a while back before seeing him as Anchors & The Sails, at numerous Open Mics, Music On The Train with Vale of Rheidol, at Carmarthen Park Lodge and more. He showed determination to get more songs written and heard, alongside pursuing his filming degree. Since performing as The Replacements with Max, stating he has recordings underway and hopes to work on more film productions, I had to hear more. 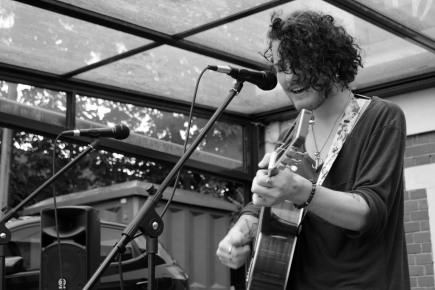 How’s studying Film & TV at Aberystwyth University been?
“Aber Uni has been great! Learning more and more about an industry I’m very passionate about and the academia that comes along with it, lots of films to come!”

So you enjoy filming then? The one we did at Commodore Cinema was a true eye opener. What are the latest plans?

“Yeah the Commodore shoot was good fun, I guess the future will just be more videos but on a larger scale each time, them being personal projects or another live session with some local musicians”

Who and/ or what inspires you?
“I’d say John Mayer and Matt Bellamy (from Muse) in terms of how I piece a chord together, I like to use triads because of the grace notes you can use at any point but most of my music I’d say is inspired by quite folky musicians, The Tallest man on Earth and King Charles are quite poetic with their lyrics which has an influence on my own work.”

The last gig I saw you at was as The Replacements. Any more to look forward to?
“The Replacements was great, but we’re both very busy people, so unfortunately isn’t always at the top of our priority lists”

Oh right so you wanting to do more gigs solo as Anchor & The Sails then?
“Yeah my solo sort of persona will probably come this year, more equipment has been purchased so I’m always looking to improve the performances and originality of my sets”

“Well once I actually have all of my tracks back they’ll be released as an EP of sorts, then hopefully get back into some solo performances with some new tracks to get excited about”

Ooo exicted.  When you thinking of release? What will they be about?
“Yeah they’ll be released at some point this year along with a tour of sorts. They’re mostly love songs if I’m honest, I think, but they’re all quite different love songs. I suppose lyrically I enjoy writing about other people and experiences and things I want to get out of my head and onto paper.”

Brilliant! Do you hope to get a film of a single together then?
“Yeah film-making is a big part of my life so hopefully I’ll find a way to incorporate it into my own music, that being a music video for one of the tracks, something minimal and vague. I’m quite picky when it comes to music videos so I’ll have to start planning a production at some point”

Ahaa wicked! I’m so excited to hear more from Anchors & The Sails, especially his original songs, with inspiration from Muse and John Mayer. Plus with more of his great films hoping to be created we must watch this space. 😀
FACEBOOK    // SOUNDCLOUD   // INSTAGRAM

Thanks for readings. More to come.
Em @ RM